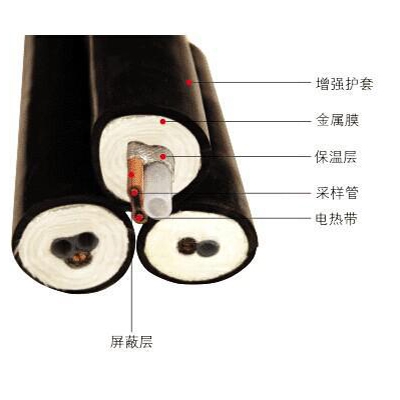 The gas pumped from silo by the pump equipped on oxygen analyzer is placed in the instrument to detect the oxygen content. Because the gas contains a small amount of water, the inner pipe will be frozen between sampling point and analysis cabinet, however, the back flushing system needs to take one to two hours to blow back automatically. In these such cold days, freeze just needs 20 minutes, if blowback, nitrogen in collecting pipe with six kilograms will back directly to the instrument, which will damage the measuring cell, so we have to choose the heat tracing way. However, dust around are too much and the particularity of process will lead to explosion, if we use this way, we need to consider security first.

In the vicinity of laboratory equipment, collecting a steam source is inappropriate, because it is prone to leak and the steam temperature is higher that easy to control. For use electric heat tracing, considering the situation of relatively large number of surrounding dust, it is recommended to use explosion-proof electric heating cable. The electrical equipment for explosive atmospheres is divided into T1-T6 groups according to its maximum surface temperature, Oxygen analyzer is antifreeze, the temperature is not too high. T4-T6 groups are optional, and we generally use self-regulating electric heating cables with flame retardant and explosion-proof performance (with metal shielding layer). High safety of the product itself, it will not produce a spark to ignite an explosive mixture or dangerous temperatures under normal operating conditions. And protective measures are provided for the structure to improve the safety of the product.
Previous :MI Heating Cable
Next :Tank electric heat tracing system
PRODUCTS
Floor Heating Thermostats
Floor Heating System
Heat Trace System
Solutions of civil heat preservation and snow melting
Thermal control solutions of construction heating
CONTACT US
HEFEI MINCO HEATING CABLE CO LTD
Add: Huaihai Road, No.1188, Jingshang Trady City, Xinzhan District, Hefei, Anhui, China
Tel: +86 551 65876703
Whatsapp/Wechat: +8618326683655
Skype: tony724sky
E-mail: info@minco-heatingcable.com
Quik Links
Home About Us Products News Inquire Contact Us
Contact Us
Copyright © 2018 Hefei Minco Heating Cable Co., Ltd.  All rights reserved.